Leslee Hammers began working in the Online Undergraduate Program in Spring 2017.  She has a bachelor’s degree in Information Systems Technologies and a master’s degree in Curriculum and Instruction, with an emphasis in Instructional Technology. Leslee was a non-traditional student for both of these degrees, working and attending school part-time. She had one daughter before she started working on her bachelor’s degree and another daughter before she finished. Leslee felt like she needed to obtain an education to be better able to stress the importance of a college education to her daughters.

Leslee has been interested in adult education, especially online education, since she began working on her bachelor’s degree. Having worked in different roles in the College of Business and Analytics since 2004, she is excited for the opportunity to utilize her education and years of institutional knowledge to assist students and faculty with online education. 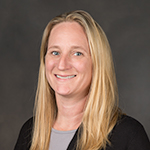 Michelle Johanson joined the College of Business and Analytics as an accountant in the Dean’s Office in 2015. She was quickly promoted to business manager and is currently the online undergraduate program manager. Managing the online program is a perfect fit for Johanson. She has experience working with online programs in the College of Business and Analytics and in the Workforce Education and Development Off Campus Degree Program as a teaching assistant and a research assistant.

Johanson is a three degree Saluki. She earned her bachelor’s degree in finance, master’s degree with a major in workforce education and development focusing on instructional design and E-learning and a Master of Accountancy, all from SIU Carbondale.

Kim joined the College of Business and Analytics online undergraduate programs in fall of 2014. She has 18 years’ experience working in higher education and has been an academic advisor for the past 9 years. Her previous roles include Chief Academic Advisor for the College of Education and Human Services, Interim Director and advisor in the former Pre-Major Advisement Center and learning support specialist with university and community college TRIO programs. Kim earned both her bachelor’s (1993) and master’s (1995) degrees from SIU.

In addition to her work with students, she is a member of the Academic Advisory Council, Core Curriculum Redesign and Implementation Task Force, Saluki Cares, EAB Student Success Collaborative and the DegreeWorks Implementation committee.  Kim previously chaired the First-Year Advisement Action Team, Retention Task Force and was a member of the Co-Curricular Assessment committee and the Chancellor’s Campus Life and Safety Task Force. She regularly presents at state and national seminars. Kim has been a member of National Academic Advising Association (NACADA) since 2009 and is a founding member of the Illinois Academic Advising Association (ILACADA), in which she held several offices.

In 2014, she was honored as the inaugural recipient of the Provost Award for Excellence in Academic Advisement. The award recognizes her dedication and professionalism in her work with students, her collaboration with peers, and her involvement with the University community.